To draw or not to draw, that is the question

Since I'm a one man band, I have total freedom on how I produce my games.

Freedom is however a double-edged sword: while my flow isn't blocking (or being blocked by) anyone, which feels great, not having stakeholders means I don't feel the need to stick to something. Namely, either drawing or coding.

I'm currently jumping between drawing quick sketches and placeholders just to set up a room so I can code the interactions, and drawing detailed rooms or characters. So my project is now composed of rooms like this one... 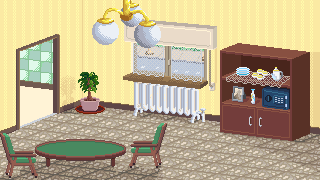 I keep telling myself that it's fine, since everything I'm doing is ought to be done anyway, so I'm not wasting anybody's time.

But it's still a frustrating part of my process because if I'm drawing, I think that I should be coding, and if I'm coding, I look at the sketch and think they look awful. And either way, I'm thinking "this doesn't look like a game at all". This is so different from making a jam game.

Hopefully my next devlog entry will be more about the game itself and not about how I'm basically clueless.

Get The Will Of Arthur Flabbington

The Will Of Arthur Flabbington

When a will talks about a hidden treasure, the obvious thing to do is to contact the author.

I mean... it doesn't matter which task you do, everything you do is progress. Just remember that you lose some efficiency every time you switch tasks. But that's sometimes a tradeoff to avoid burnout.